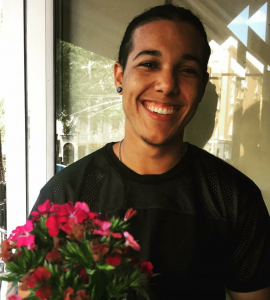 ah Elyse Sayers (they/them) is a fourth-year doctoral student in Environmental Psychology. They use poetic and participatory methods to study the ways queer and trans Black, indigenous, and people of color (QTBIPOC) make and maintain place and the factors that support QTBIPOC placemaking. They frequently work with ideas of belonging, disposability, histories, and futurity whether they are crafting clocks from scrap metal; facilitating Afrofuturism workshops; making performance art; or researching the ways QTBIPOC turn pathologized and discarded geographies into sites of home, dreaming, scheming and liberation.

Prior to starting at the Graduate Center, Jah earned their B.A. in urban studies, specializing in anthropology, at Columbia University. Their undergraduate thesis focused on spatial contestation between residential and non-residential members of Greenwich Village, specifically examining use of public space on and around the Christopher Street Pier by queer and transgender youth of color and the ways gay-identified spaces in the neighborhood often exclude the most vulnerable of queer-identified people.

Jah has worked in editing and grant-writing for New Village Press, most recently conducting rigorous oral history interviews with author Carl C. Anthony in order to complete The Earth, the City, and the Hidden Narrative of Race (2017). They now serve on the board of New Village Press. From 2016-2017, Jah was the inaugural Equitable Public Space Fellow at the Design Trust for Public Space, where they worked to center equity and meaningful engagement in the many facets of Design Trust’s work. Jah is also an active member of the Audre Lorde Project and a founding member of the Black Trans Assembly for Abolition.

Jah can be reached at jsayers (at) gradcenter (dot) cuny (dot) edu.

Interview: Ph.D. Student Jah Elyse Sayers On How Trans People of Color Establish Their Sense of Place in NYC (2020)