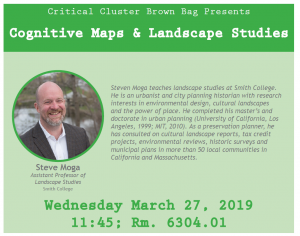 The talk is free and open to the public! 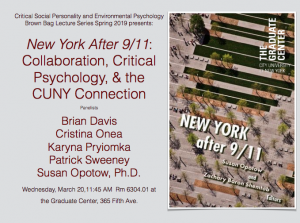 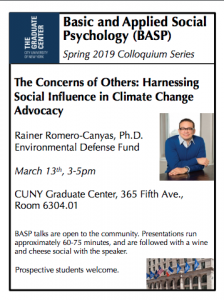 Come see Dr. Rainer Romero-Canyas of the Environmental Defense Fund for his talk

“The Concerns of Others”: Harnessing Social Influence in Climate Change Advocacy

Please join us March 20th at 6:30PM for our first book salon of the semester: EP Faculty member Michelle Fine will be in conversation with Wendy Luttrell and Limarys Caraballo about her new book, Just Research in Contentious Times: Widening the Methodological Imagination.

Register for the event here: https://www.eventbrite.com/e/csws-book-salon-just-research-in-contentious-times-michelle-fine-tickets-57859110156?aff=affiliate1

See the flyer below for more details. We hope to see you there! 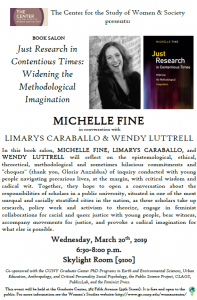 All But Dissertation Brown Bag 3/6 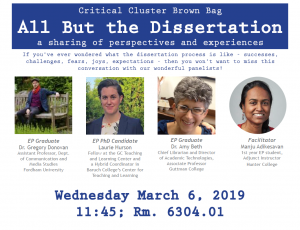 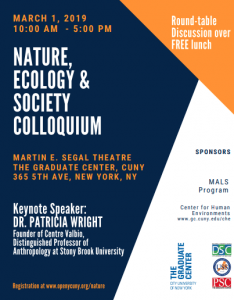 We are very excited to be hosting a revival of the Nature, Ecology & Society Colloquium at the Graduate Center. If you have not visited our website, please do so: www.opencuny.org/nature
Please click HERE for the schedule!
The event will be held on the first floor of The Graduate Center, CUNY in the Martin E. Segal Theatre. The theater is located past the Mina Rees Library and 365 Express on the right side of the building. Please feel free to ask security in the lobby if you can’t find the room. A light breakfast will be provided in the Segal Theatre at 9:45 am. Due to the food restrictions of this theater no outside food or drinks will be allowed into the conference room. Lunch will be served on the 6th floor of the Graduate Center in room 6304.01.
Registration will be outside of the conference room, please make sure to grab a name tag and sign-in before entering the room. I’ve attached the flyer and conference program, which can also be found on our website. Any questions can be emailed to natureecologysociety@gmail.com
We are looking forward to a wonderful and educational event this Friday. See you all soon! 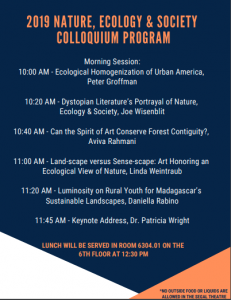 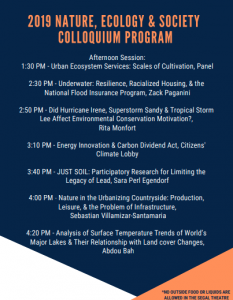 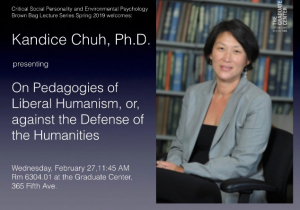 Join us in welcoming Dr. Kandice Chuh for her talk “On Pedagogies of Liberal Humanism, or, against the Defense of the Humanities”

Free and Open to the Public

Feb 27: Kandice Chuch: On Pedagogies of Liberal Humanism, or, Against the Defense of the Humanities

March 6: EP Advanced student Panel: All but the Dissertation: Sharing of Perspectives and Experiences

April 17: Wendy McKenna and Suzanne Kessler: Where Do Ideas Come From and Where Do They Go: Part II 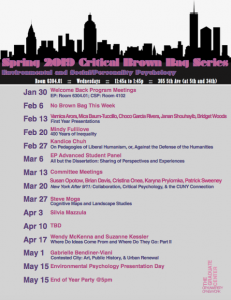 None of the Above: Book Talk 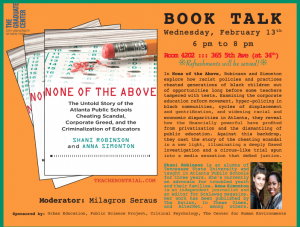 None of the Above: The Untold Story of the Atlanta Public Schools Cheating Scandal, Corporate Greed, and the Criminalization of Educators

Room 4202 at the CUNY Graduate Center

In None of the Above, Robinson and Simonton explore how racist policies and practices cheated generations of Black children out of opportunities long before some teachers tampered with tests. Examining the corporate education reform movement, hyper-policing in Black communities, cycles of displacement and gentrification, and widening racial and economic disparities in Atlanta, they reveal how the financially powerful have profited from privatization and the dismantling of public education. Against this backdrop, they cast the story of the cheating scandal in a new light, illuminating a deeply flawed investigation and a circus-like trial spun into a media sensation that defied justice.

Shani Robinson is an alumna of Tennessee State University and taught in Atlanta Public Schools for three years. She’s currently an advocate for trouble youth and their families.

Anna Simonton is an independent journalist and an editor for Scalawag magazine. Her work has been published by The Nation, In These Times, and AlterNet, among others.

Green space, health and gentrification: For whom is the green and healthful city?

Green space, health and gentrification: For whom is the green and healthful city?

With exposure to urban green space demonstrated in past studies to benefit human health, cities have recently focused on increasing access to parks and other open spaces as a public health intervention, particularly for historically underserved communities such as among minority residents and residents with low socioeconomic status. I will present the results of a recent analysis of sociodemographic data drawn from the US Census bureau, green spatial data from the New York City Department of Parks and Recreation, and health data from an annual surveillance survey of New York City residents. Our research asks whether neighborhood gentrification status matters when considering the health benefits of green space exposure, and whether the benefits of such interventions are received equitably across racial and socioeconomic groups. Results indicate that structural urban public health interventions, such as the creation of green space may not benefit all residents equally. Our findings further highlight the importance of evaluating and conceiving of urban structural urban interventions, such as the creation of green spaces, in the context of other urban processes affecting the distribution of and access to resources in cities, such as gentrification.

Helen Cole, DrPH, is a post-doctoral researcher with the Barcelona Lab for Urban Environmental Justice and Sustainability, affiliated with the Institute of Environmental Science and Technology at the Autonomous University of Barcelona and the department of epidemiology and public health of the Medical Research Institute of the Hospital del Mar. She holds a Doctorate in Public Health from the City University of New York Graduate Center and an MPH in Health Behavior and Health Education from the University of North Carolina at Chapel Hill. She specializes in urban health, health equity and community health. Drawing from the fields of sociology, critical geography, and urban planning, her work challenges traditional public health perspectives by questioning and evaluating the long-term social justice impacts of structural urban interventions (e.g., the potential for green/environmental gentrification resulting from urban greening). Her current work explores whether, and how, healthier cities may also be made equitable, placing urban health interventions in the context of the broader urban social and political environments.