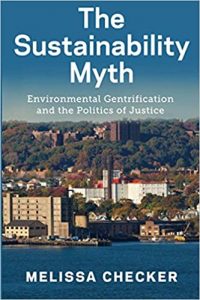 Focusing on industrial waterfronts and historically underserved places like Harlem and Staten Island’s North Shore, Checker takes an in-depth look at the dynamics of environmental gentrification, documenting the symbiosis between eco-friendly initiatives and high-end redevelopment and its impact on out-of-the-way, non-gentrifying neighborhoods. At the same time, she highlights the valiant efforts of local environmental justice activists who work across racial, economic, and political divides to challenge sustainability’s false promises and create truly viable communities.

The Sustainability Myth is a cautionary, eye-opening tale, taking a hard—but ultimately hopeful—look at environmental justice activism and the politics of sustainability.

“Using the saga of the doomed New York Wheel as a dramatic example of short-sighted, ill-conceived urban development or ‘sustainaphrenia,’ Melissa Checker’s ethnography cruelly exposes the failings of neoliberal technocracy. From redlining to rezoning, from environmental justice to environmental gentrification, she brilliantly exposes the ruptured logics of pairing sustainability with urban redevelopment.” ~Julian Agyeman, co-author of Sharing Cities: A Case for Truly Smart and Sustainable Cities

“In this revelatory study, based on assiduous fieldwork, Melissa Checker exposes the false promises of “sustainability.” She coins the word ‘sustainaphrenia’ to convey the feeding frenzy of politicians, real estate moguls, developers, planners, and upscale homebuyers who are lulled by the siren of Bloomberg’s ‘luxury city,’ facilitated by the rezoning of vast swaths of New York City. The result is the greening of some neighborhoods and the browning of others. Checker also comes to the epiphany that the environmental justice activists whom she admired are another symptom of sustainaphrenia, as the twin threats of overdevelopment and climate change are cast asunder.” ~Stephen Steinberg, author of Turning Back: The Retreat from Racial Justice in American Thought and Policy 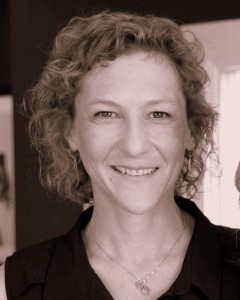 Dr. Melissa Checker (PhD NYU, 2002) serves on the faculties of the PhD Program in Anthropology and Environmental Psychology at the CUNY Graduate Center. She is also the Hagedorn Professor of Urban Studies at Queens College. Her research focuses on the politics of urban sustainability, environmental racism, grassroots activism, and managed retreat. Her book, The Sustainability Myth: Environmental Gentrification and the Politics of Justice was published in 2020 (NYU Press.

She is also the author of Polluted Promises: Environmental Racism and the Search for Justice in a Southern Town (NYU Press, 2005) and co-editor of Sustainability in the Global City: Myth and Practice (with Cynthia Isenhour and Gary McDonogh, Cambridge 2015) and Local Actions: Cultural Activism, Power and Public Life (with Maggie Fishman, Columbia U Press, 2004), In addition, she has authored a number of academic articles and book chapters, as well as articles for popular magazines and newspapers.

Click here for more information on The Sustainability Myth.