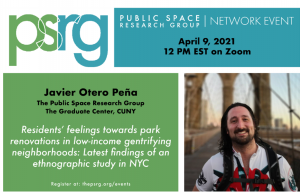 Everyone deserves access to parks of quality. In an effort to make cities more just, local authorities in many cities around the world are investing in public spaces in neglected, low-income and highly dense neighborhoods. However, studies show that such investments may contribute to increasing land values and rents (Crompton, 2005), and as a paradoxical consequence, population in these areas shifts, and the low-income residents for whom the renovations were intended end up displaced to other areas of the city (Gould & Lewis, 2017). It is unclear whether this threat of displacement is known by residents, and whether the degree of gentrification in the area changes how residents perceive park renovations and investment in their neighborhoods. Do they welcome the changes or are they wary of improvements allegedly intended for them? This study is an ethnography of parks renovated in low-income gentrifying neighborhoods in New York City, from an urban environmental justice perspective. Using Rapid Ethnographic Assessment Procedures (Low et al., 2005), residents and users of four parks in minority-majority neighborhoods at different stages of gentrification were interviewed about their feelings towards renovations and neighborhood change itself, with an emphasis on procedural and interactional justice, and on identifying potential mixed feelings.

After registering, you will receive a confirmation email containing information about joining the meeting. 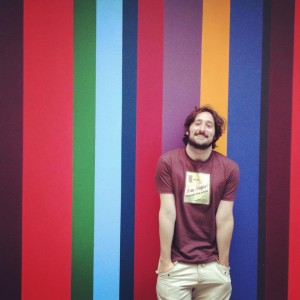 Javier Otero Peña is a PhD candidate in Environmental Psychology from Caracas, Venezuela. Javier is the Student Advisor for the M.S. in Data Analysis and Visualization at The Graduate Center, CUNY. He is also a research associate at the Public Space Research Group, and a research assistant for the PARCS study in the CUNY School for Public Health. His dissertation looks at park use, park renovations and place attachment in New York City.

Javier’s field research paper studied the politicization of public spaces through a participatory mural in East Harlem. He was a GC Digital Fellow from 2016-2020. In 2016, he took part in the CUNY-Humboldt University Summer School in Berlin, and in 2017 he participated in the Digital Humanities Research Institute in Victoria University, Canada. He was a Digital Humanities Research Institute Fellow in 2018-19, and received the Provost’s Digital Innovation Grant in 2017 and 2019.