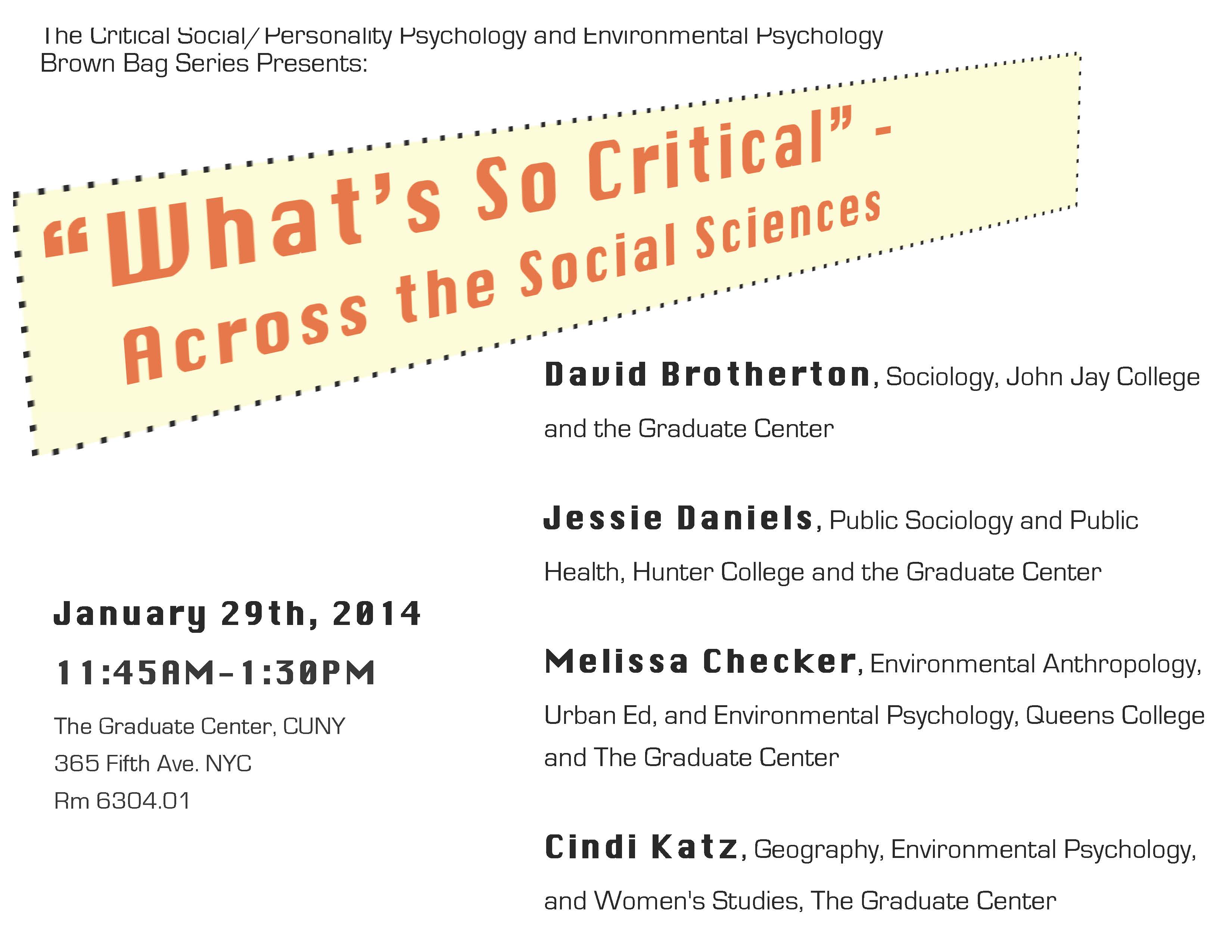 Tales from the Trash: Sanitation Workers, Sustainable Cities, and the Value of Knowledge

Join CUNY Law for a conversation with Dr. Robin Nagle, author of “Picking Up” and anthropologist-in-residence with the New York City Department of Sanitation, and Professor Rebecca Bratspies, director of CUNY Law’s Center for Urban Environmental Reform.

This event is free, but registration is required. Click here to register. 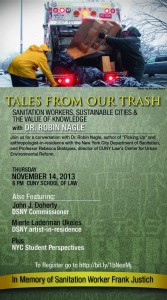 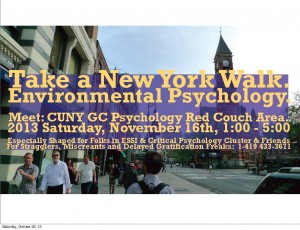 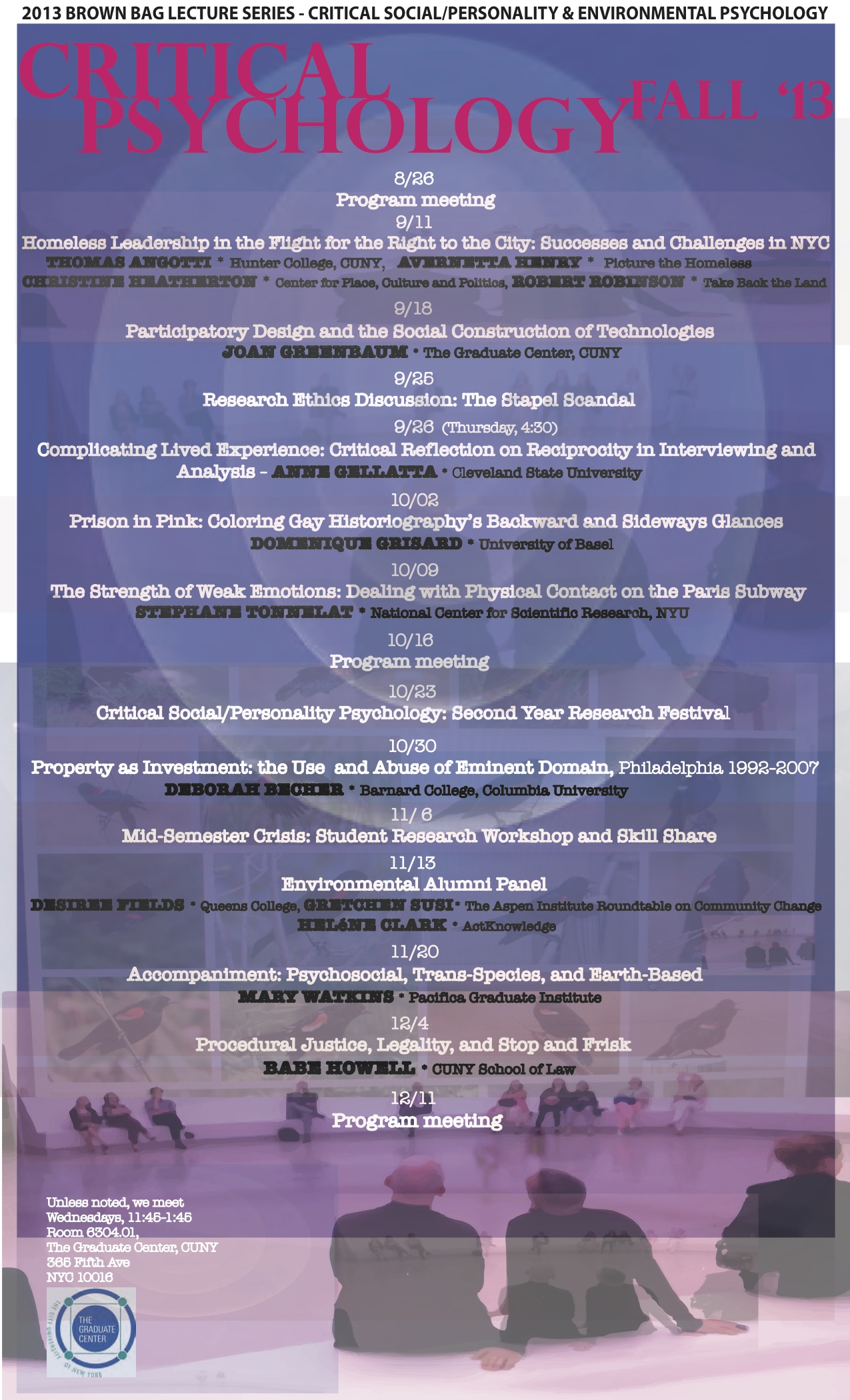 In the heart of New York City

Studying people, places, and spaces since 1968

The doctoral Subprogram in Environmental Psychology—the first of its kind—evolved from work done at CUNY’s Brooklyn College by social and developmental psychologists in the early 1960s. The program was formally instated as part of the doctoral program in Psychology at the CUNY Graduate Center in 1968, and remains a vibrant heart of an interdisciplinary field, and the only Ph.D. granting program of its kind in the United States.

The program was initiated with three ideas: 1) the emerging environmental crisis—from ‘silent spring’ to urban decay—was indicative of a breach in social identity, human development and dignity, which the discipline of psychology at the time was failing to address; 2) this research-based program would operate outside of the then received mode of inquiry in social psychology—the laboratory—where variables can be controlled and manipulated. Our approach was, instead, to embrace the messy world of the everyday, based on the understanding that it is those very complex variables that are fundamental in people-environment relationships; 3) interdisciplinary was key as a means to include the many perspectives that enable a useful understanding of the interactions of people and place, while embracing the policy and design disciplines that shape our environments.

Environmental Psychology: The interdisciplinary doctoral study of the human environment

Our research and pedagogy have evolved in important and distinctive ways since the program was established. In the 1960s, for instance, much of our work focused on closed institutions—notably mental hospitals—where variables could be somewhat controlled. Observational methodologies were created, with behavioral mapping the most noteworthy, to advance the rigor of this work. Some of the key issues studied were “privacy,” “crowding,” and the effects of institutional environments. This earlier work continued through the 1970s as a number of faculty and students began research projects that moved from the more closed environments of total institutions into the wider world, including parks, public spaces, schools, and housing. As we continued to develop the methodologies associated with behavioral mapping, members of our program were also key to the inauguration of environmental autobiography.

With the support of an NIMH Training Grant beginning in the late 1970s, the trajectory of research and training altered to add new foci, among them children’s environments, health environments, public space, and home and homelessness. Childhood City Newsletter was begun. Program members addressed issues such as public art, housing, community development, environmental justice, with ever greater attention to questions of difference, equity, conflict, and social justice. Participatory and action research approaches were strengthened. Program members also focused more sharply upon on policy related concerns such as housing and gentrification, children’s environments, public space, and public health. The Center for Human Environments was inaugurated as an umbrella for human-environment funded research and consulting projects. CHE focused initially and largely on the local urban environment but in recent years on globally conceived people-environment issues.

Environmental Psychology: 40 years of committed action and research in the word

In the 1990s our research embraced more interactive methodology, especially various forms of open ended and group interviews and within the framework of Participatory Action Research. It was also in the 1990s that a concern emerged especially in the area of environmental design research for the lack of effectiveness of the work done in this field. A great deal was being learned but in terms of public policy there was little to show. This led to a turn towards social theory that is still evolving within the program. A title often used for the program is indicative of this changing perspective: “Environmental Social Science.” Since the 1990s the greater emphasis on social theory has been joined with a more direct emphasis on public policy and intervention. Program members focus on issues of meaning-making, social and environmental justice, housing and housing policy, sustainability, embodiment and restorative environments, spaces of difference, the privatization of public space, ‘child friendly cities,’ and the effects of ‘security’ practices on social space. We draw on a broad range of paradigms, including hypothesis testing statistical models, grounded theory, ethnographic participant observation, and narrative construction and analysis. We are excited by visual approaches including video, interactive self- reporting, web-based social media innovations, and GIS mapping techniques.

Over the years the program has formed bonds with other Graduate Center Ph.D. Programs, first Social-Personality Psychology, but also Developmental Psychology, Sociology, Anthropology, Geography, and, more recently, Urban Education; we have forged Master’s level agreements with the programs in Public Health and Urban Design at CUNY; and have working relationships with the certificate programs in Health Psychology, Women’s Studies, Interactive Technology & Pedagogy, among others. Our current faculty is drawn from across The City University of New York, including the Hunter College Geography, Urban Affairs, and Planning Departments, City College Architecture and Urban Design Programs, Queens College Urban Studies Department, and the Philosophy Department at Brooklyn College.

Among our program’s notable achievements are being the first doctorate granting program in Environmental Psychology, and the only one extant in the U.S., an honorable if treacherous distinction. The founding of our program was integral to, and in many ways indistinguishable from, the establishment of our field. The first basic text of readings, Environmental Psychology: Man and His Physical Setting, was co-authored by program founders William Ittelson, Harold Proshansky, and Leanne Rivlin, and was critical in establishing the boundaries of the field. Our Program was recognized as a whole in 1976 by our flagship professional organization, the Environmental Design Research Association (EDRA), as well as individual faculty with a prestigious Career Award to Leanne G. Rivlin in 1990, and Distinguished Service Awards to Gary Winkel in 1989 as Founding Editor of Environment and Behavior, and to Roger A. Hart in 1994 as Founding Director of the Children’s Environments Research Group. Indeed, two key peer reviewed journals in the field—Environment and Behavior and Children’s Environments Quarterly (now Children, Youth and Environments) were founded by our faculty. As of 2012 May there are 132 graduates of our program.

Recently, in partnership with the interdisciplinary Master’s of Liberal Arts (MALS) program, we developed a track in Social and Environmental Justice Studies to compliment the Environmental Psychology Training Area.